It's been way too long since my last post and so much has happened that it will be difficult not to overwhelm this post with information and pictures!  In mid-May, my mom came for a month-long visit.  It was a wonderful time of getting to introduce her to our lives, our friends, our work, our church, and our country.  She jumped into our daily routine here and even had her own assignments at the rehab center.  But it definitely wasn't all work and hopefully telling a bit about our activities while she was here will give you a better taste of our lives in Ukraine!

We celebrated Kolya's 40th birthday with a surprise outing for pizza, bowling, and a walk in the park. For me, the greatest joy of the day was watching Kolya in his electric wheelchair.  We've known Kolya since 2008, when he first came to rehabilitation following his spinal cord injury. He was depressed and completely dependent on his aging parents for all of his care.  I remember how he learned to do some things independently, like feed himself and work on the computer.  In time, he began attending church, camps, and other activities in our ministry and God granted him the gift of salvation. 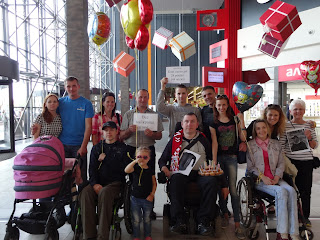 Due to the extent of Kolya's injury, he still has very little independent movement...he can't roll, sit up, or propel his manual wheelchair more than a few inches.  Physically, he continues to depend completely on others.  His mother was his primary caregiver until she died a couple of years ago.  His apartment is not wheelchair accessible, so at home he is constantly in bed.  He longs for the opening of the Agape House...and one of the joys awaiting him as a resident of the Agape House is the opportunity to use this electric wheelchair daily! ﻿
﻿ 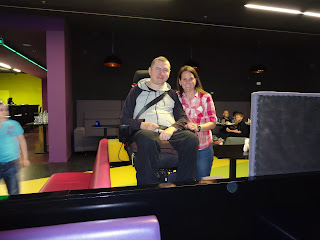 Our ministry has over 40 electric wheelchairs that have been generously donated from other countries..and they will be well-used next month at camp!  But unfortunately, accessibility issues in Ukraine prevent them from being readily used in daily life.  The Agape House will change that for those who reside there and on Kolya's birthday, as we watched him zip around when and where he wanted for hours, we had a little taste of what that would mean.  Freedom. Independence. Joy.  For Kolya and many others!﻿ 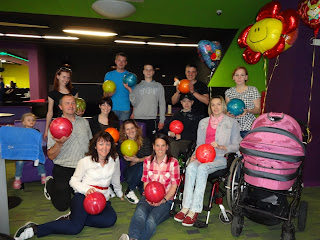 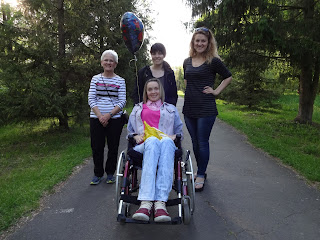 Our next celebration was a wedding!  Alla, one of our therapists, was a beautiful bride and we all enjoyed celebrating with her and her new husband. 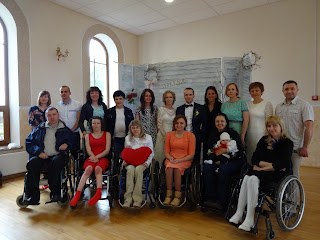 We visited friends, including Sergiy and Natasha Bolchuk, the leaders of our ministry:﻿﻿
We traveled to the village to visit Lyuda (our former roommate) and her family: 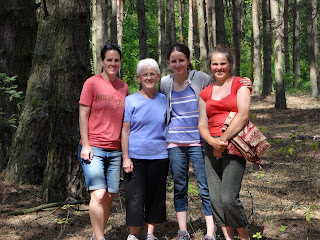 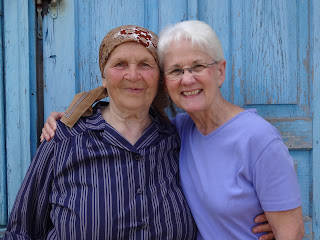 We took Julia with us to a replica village outside of Lutsk to see how Ukrainians used to live. 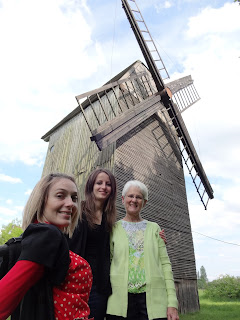 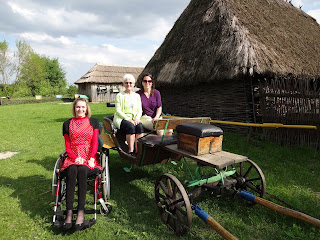 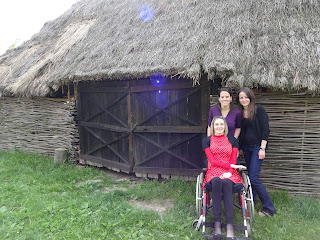 
We toured the Lutsk Castle, which was built in the 11th century, and walked the streets of Lutsk. 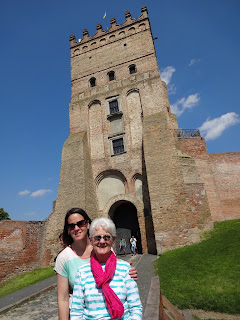 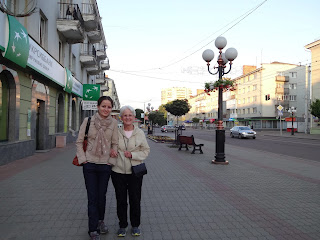 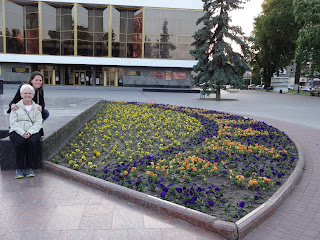 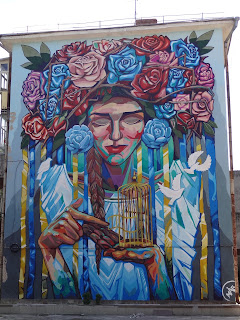 We traveled to Sveta's hometown of Zhitomir for a weekend with her mom. 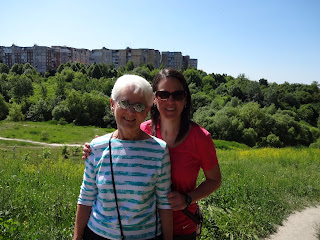 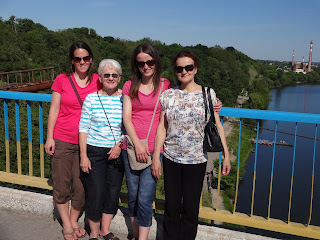 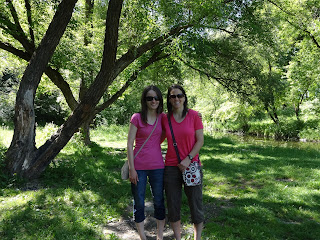 We drove and walked in the countryside around Lutsk, enjoying the fields of poppies and wheat and the sunny, warm days. 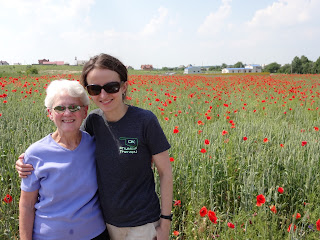 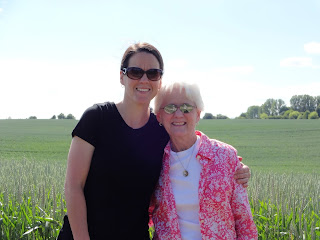 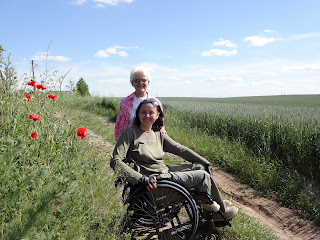 Mom was a welcomed 4th member to play the harps at church on her last Sunday! 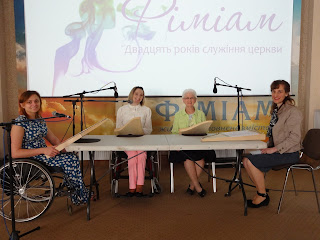 And rehab goes on, of course, but since this post is long already I will write a separate onet soon about rehab.
﻿
Vanya, pictured above, is a new addition to our team.  He is Katya's husband (she is between me and Vanya) and is now a volunteer at our center in the mornings.  He has expressed a desire to attend our future PT school and join our team as a  full-time therapist.  For now he is learning to work with prophylactic patients and, since he has no medical background, he is also my "guinea pig," letting me test the clarity of the material that we are preparing for the PT school on him.  A male PT for our center is an ongoing prayer request and Vanya seems to be on track to be an answer to that prayer!

The last bit of news I will share in this post is about the Festival of Hope crusade that we attended yesterday in Lviv.  It was put on by the Billy Graham Evangelistic Association, with preaching by Franklin Graham and music by various Ukrainian and American musicians.  Over 35,000 Ukrainians were in attendance at the large soccer stadium built in recent years.  We traveled in 3 buses with people with disabilities who are unbelievers or who brought a friend or family member who is an unbeliever - our group totaled 26. 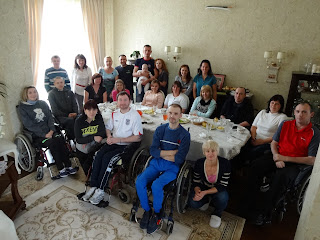 We traveled 4 hours in the cold rain, praying the skies would clear before the outdoor event.  In Lviv, we were welcomed by Christian family into their spacious home so that people with disabilities could rest for a couple of hours and eat before the event.  It continued to rain all afternoon, but as we arrived and unloaded at the stadium, the rain eased up and then stopped.  There was not another drop of rain until we were headed home!  We brought electric wheelchairs for people with spinal cord injuries and had to go to 3 entrances to find an accessible way to the stadium. 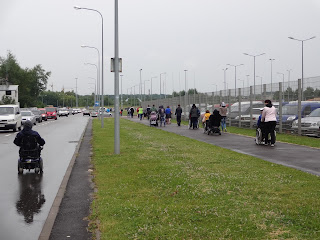 Eventually we not only got into the stadium, but were taken onto the field for the closest seats in the house and an unobstructed view for people in wheelchairs.  During the event the crowd grew and we were eventually joined by many others on the field.  In the end, the report is that around 3,000 people went forward to repent, including two 16-year-old boys who were part of our group.  Please pray for the Ukrainian churches as they follow up with all of these people and for God's continued work in the hearts and lives of His new children. 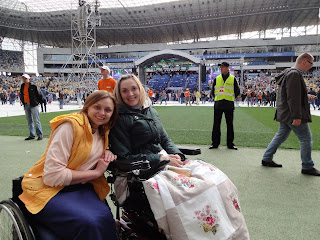 I apologize for the length of this post.  I'll try to write soon about rehab, but until then here are a few prayer requests:

- Camps for people with disabilities next month (Adults: July 14-19, Children: July 22-28) - people to accept invitations to come, finances, program preparation, preaching, preparation of group leaders, salvation of people who come to camp, volunteers to staff the camps adequately
- Final 2 weeks of work at our rehab center before camps and vacations - pray for the education of all our patients for home activities during this extended break and that we finish these 2 weeks strong
- People who repented at the Festival of Hope, particularly Anton and Lubomir from our group

I hope you are all having a great summer and I would love to hear about your lives as well! More to come shortly with details on rehab...