It’s been almost 5 weeks since I moved to Ukraine and God has answered many prayers.  This past week, with 6 days to spare, everything was finalized and I received my 1-year residency passport! There were a few bumps and surprises along the way, but we are praising God that the process is completed for this year.  Also, we found a foreign language school that is only a 5-minute bus ride from our rehab center so I now take 1:1 Ukrainian language lessons twice a week.  In the mornings, I typically stay home for about 2 hours to study and do my homework while Sveta and the other therapists get started in rehab.  I join them later to provide input or assistance where needed until lunch.  I have my lessons on Tuesdays and Thursdays after lunch, but otherwise our afternoon schedule has been variable up to this point.  Several new patients, both adults and children, began this week at the rehab center so the schedule is filling up more and more.  Also, since I mentioned it was off in the last post I should mention that the hot water was restored.  And this week a friend installed a holder for our hand held shower head, so showering has become a much faster and more convenient process again!  Thanks to the many of you who have been praying for these and other requests – I am so grateful for your prayers and our God who hears and answers! My new passport
﻿
Prior to resuming work with patients 2 weeks ago, we spent several days deep cleaning and preparing the center.  Among my assignments was to clean out and organize the closet where we store the many medical items that have been collected over the years.  Many of these items were donated in America and myself, Krista, and others have carried them in our luggage on many previous trips.  We have a vast array of items, including positioning boots, braces for every joint, shoulder slings, children's and adult's AFOs (I will explain later for non-medical people), and all manner of random straps, Velcro, padding...just to name a few!  Some of these items were custom-made and the likelihood they will fit another person is small, but we keep them anyway.  There were several items that I saw and thought "We'll never have someone come to us who needs this."  But I sorted them, organized them and stored them anyway.  Why do we keep these things?  Because many medical items just aren't available in Ukraine.  Medical equipment, like the smaller but important items mentioned above, along with larger items like wheelchairs and walkers, can be difficult if not  impossible to get in Ukraine.  Meet Mark: 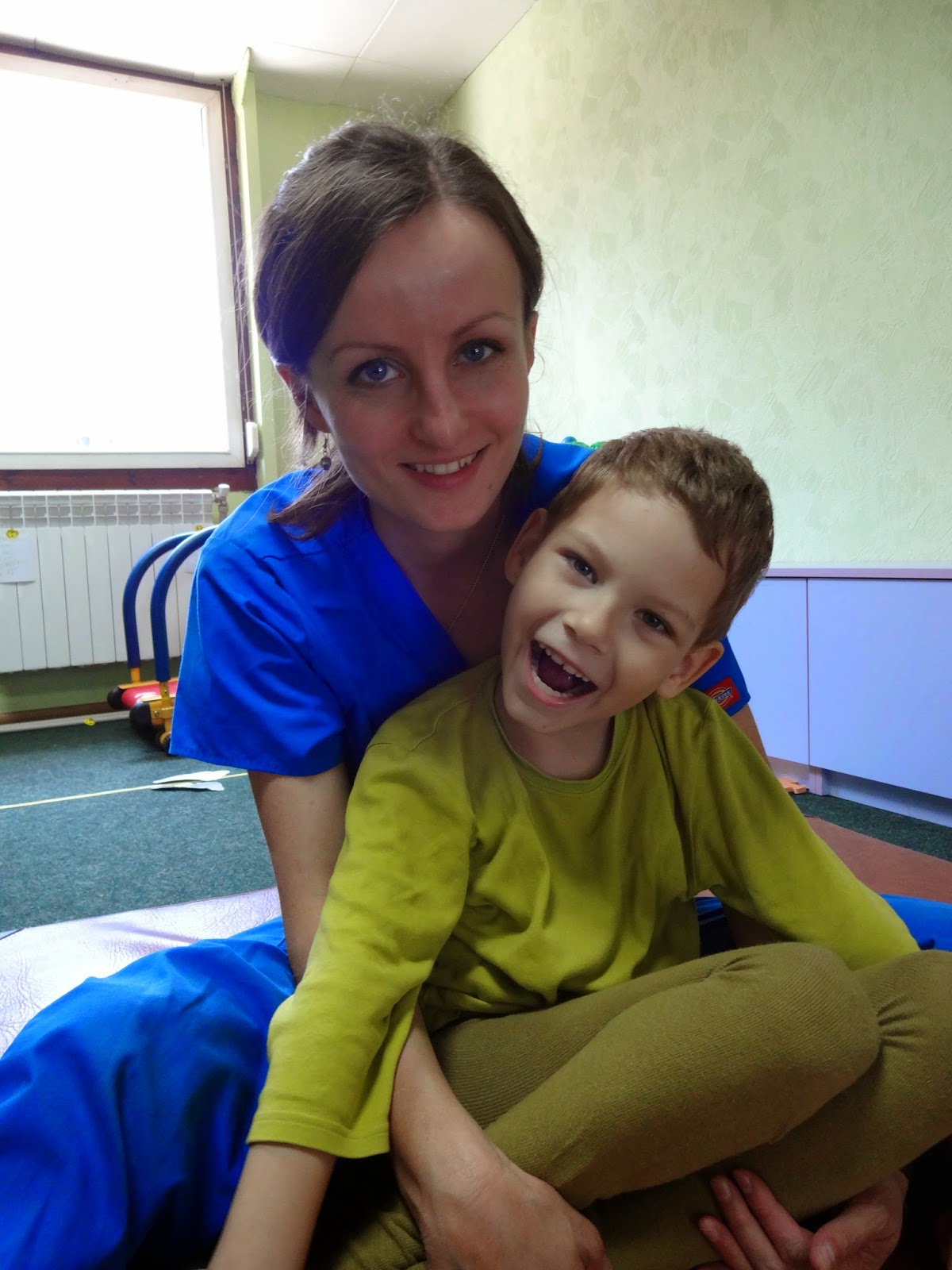 I used to work with Mark in 2009 and 2010 when he was just a little guy, but he had that same big, heart-warming smile!  Now he's probably 7 years old and Sveta has been working with him 3 times a week for the past year.  Mark has cerebral palsy and has limited control of his limbs, head, and trunk.  He has outgrown his stroller so his mom now has to carry him.  At home they have a large and improperly fitting stationary chair that he can tolerate sitting in for short periods of time, but he needs a properly fitting wheelchair.  We don't have access to one to give him and his mom has been searching for one with no success.  Please pray that a wheelchair can be found for Mark.
Meet Ihor: Well, for now you'll just have to imagine him.  This was his first week at our center and he wasn't yet up for pictures.  He is 27 years old and is a quadriplegic following a diving accident last summer.  He, his wife, and their daughter came from another city to receive rehab at our center for a month.  This is his first rehab in the year since his injury.  His injury is at C7, meaning he has very good arm function and because of this he has tremendous potential to function independently at a wheelchair level.  But he has spent this year almost entirely on his back at home, sitting up for only 10-15 minute periods of time.  Somehow his family received an electrical wheelchair, but he doesn't use it.  With what I've seen of Ukrainian village homes, it's unlikely that he could even try to use it in his home.  So he moved to Lutsk for rehab and when our driver went to pick him up on the first day, he had to carry him to the van and into the center.  Then we discovered that our storage center is depleted and we don't have a wheelchair to give him either.  A wheelchair has been loaned by another patient for transportation during this month, but we are still searching for a wheelchair he can take home.  Please pray for God to supply one.
Now meet Katya.  She is 30 years old and has had neurological deficits for 8 years due to her previous addiction to drugs.  She is also a new patient at our center this week.  She has a very slow gait with multiple impairments and after watching her walk and talking with her evaluating therapist (also named Katya!), I headed into that newly organized closet to see if we had anything to improve her right leg control.  She needed an AFO (which is basically a lower leg brace that provides some foot, ankle, and knee control) so I dug through the box.  All of our AFOs were custom-made for someone else so it's very difficult to find one that meets the needs of this patient AND fits them probably.  But by the grace of God we found one!  Katya took 2 steps and immediately felt less pain and more control in her knee.  Now to solve the next problem...a shoe that was big enough for the brace.  Katya didn't have any and may not be able to afford new shoes.  So I went back to the closet and my eyes landed on one of those items I thought for sure we would never use - a cast shoe!  Actually we have 3 or 4 and after Katya settled on the one she liked best she was thrilled!  As I watched her walk I was so grateful for all those small and large items that have been donated to our center in the past years so that we could make a difference now in Katya's life and hopefully many more!  Please also pray for Katya to understand and believe the true Gospel.  She talked with her therapist about a visit from some men earlier in the week and what she reported hearing was false doctrine, so please pray for Katya (the therapist) and Katya (the patient) as they talk during their sessions about the true Gospel. 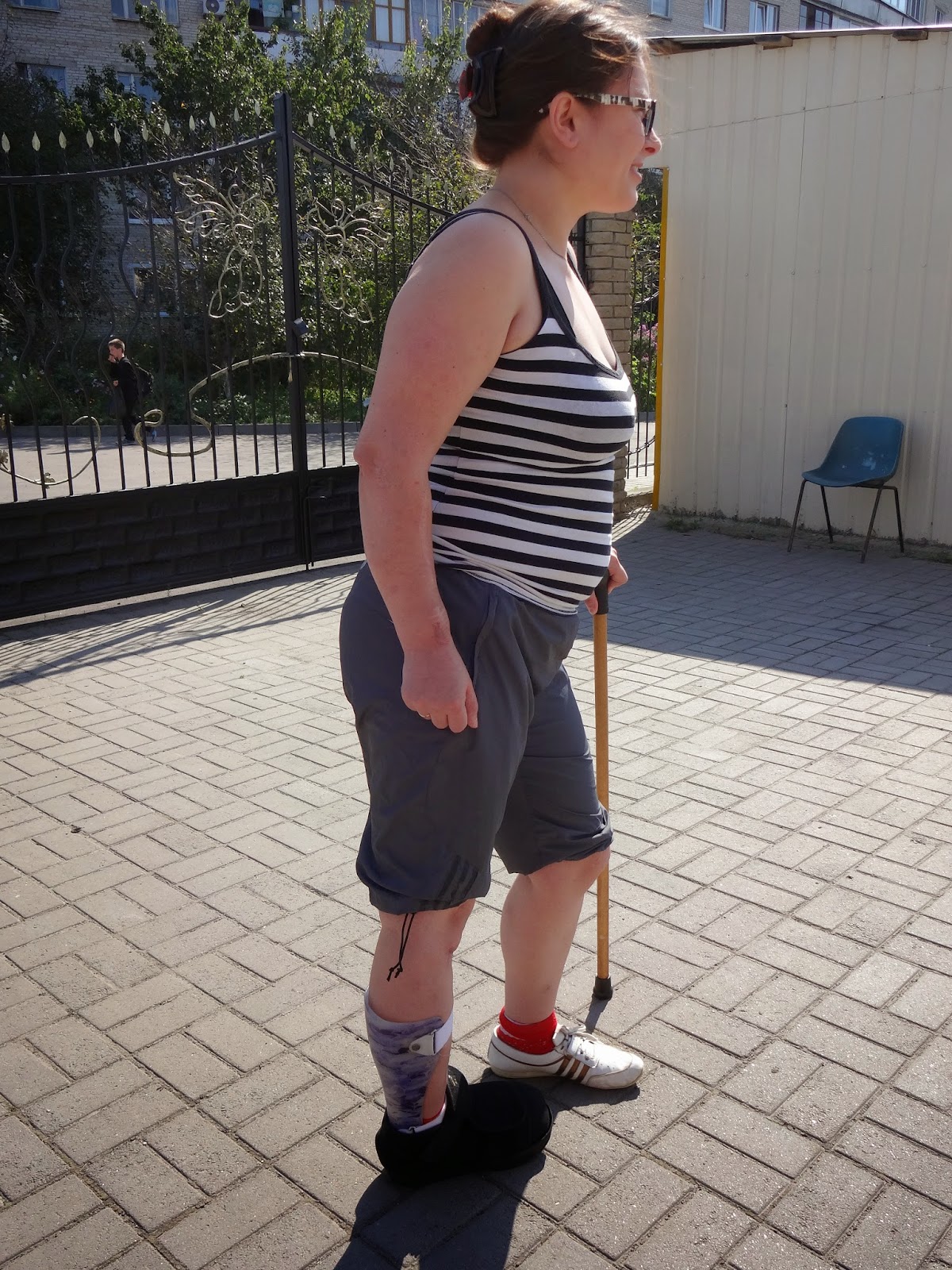 Please also continue to pray for the situation in eastern Ukraine.  Starting on September 20th, the Christian mobile medical clinic that Sveta has joined previously will spend 8 days in Slavyansk and Kramatorsk, providing medication and medical attention to those in need.  Sveta is praying about going, but for now I have been counseled not to go for various reasons.  Please pray for those who do go and for those they will serve.
Thanks to everyone who prays for me and for the work here and also for those who have sent me encouraging messages and emails! Now to conclude with a few photos from the past weeks:

Walking in the park with friends 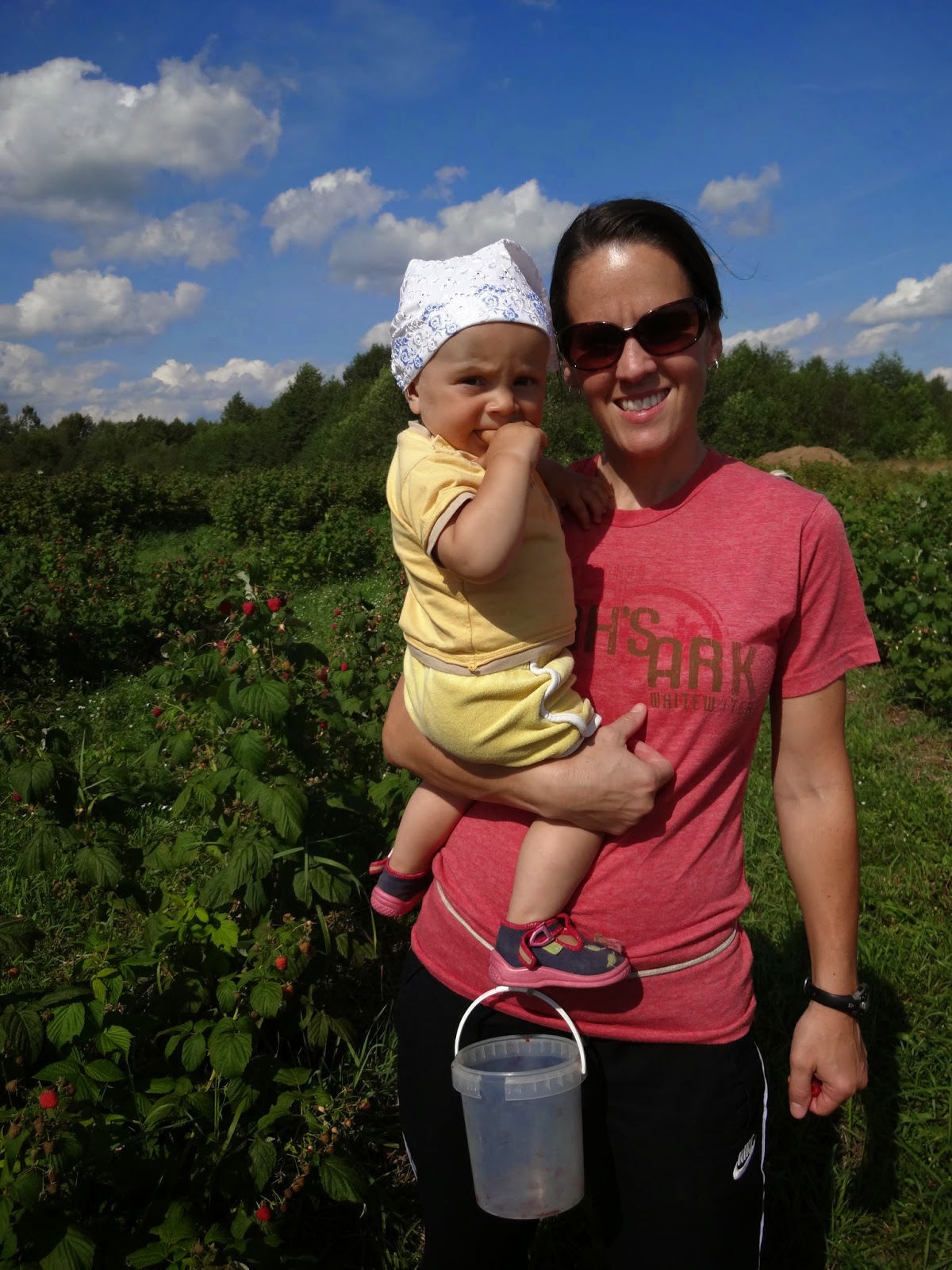 Picking raspberries in the village 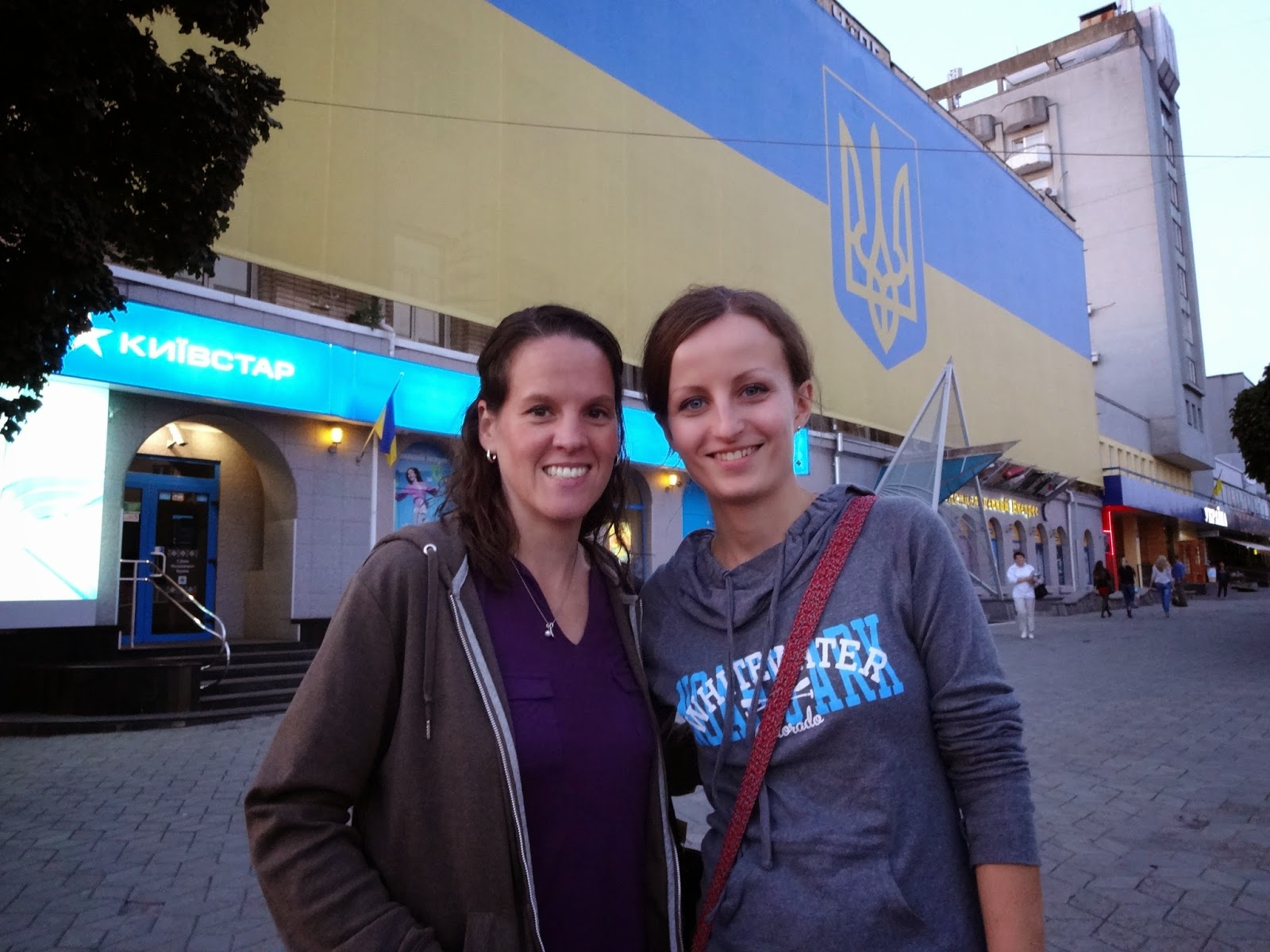 A weekend in Zhitomir, Sveta's hometown 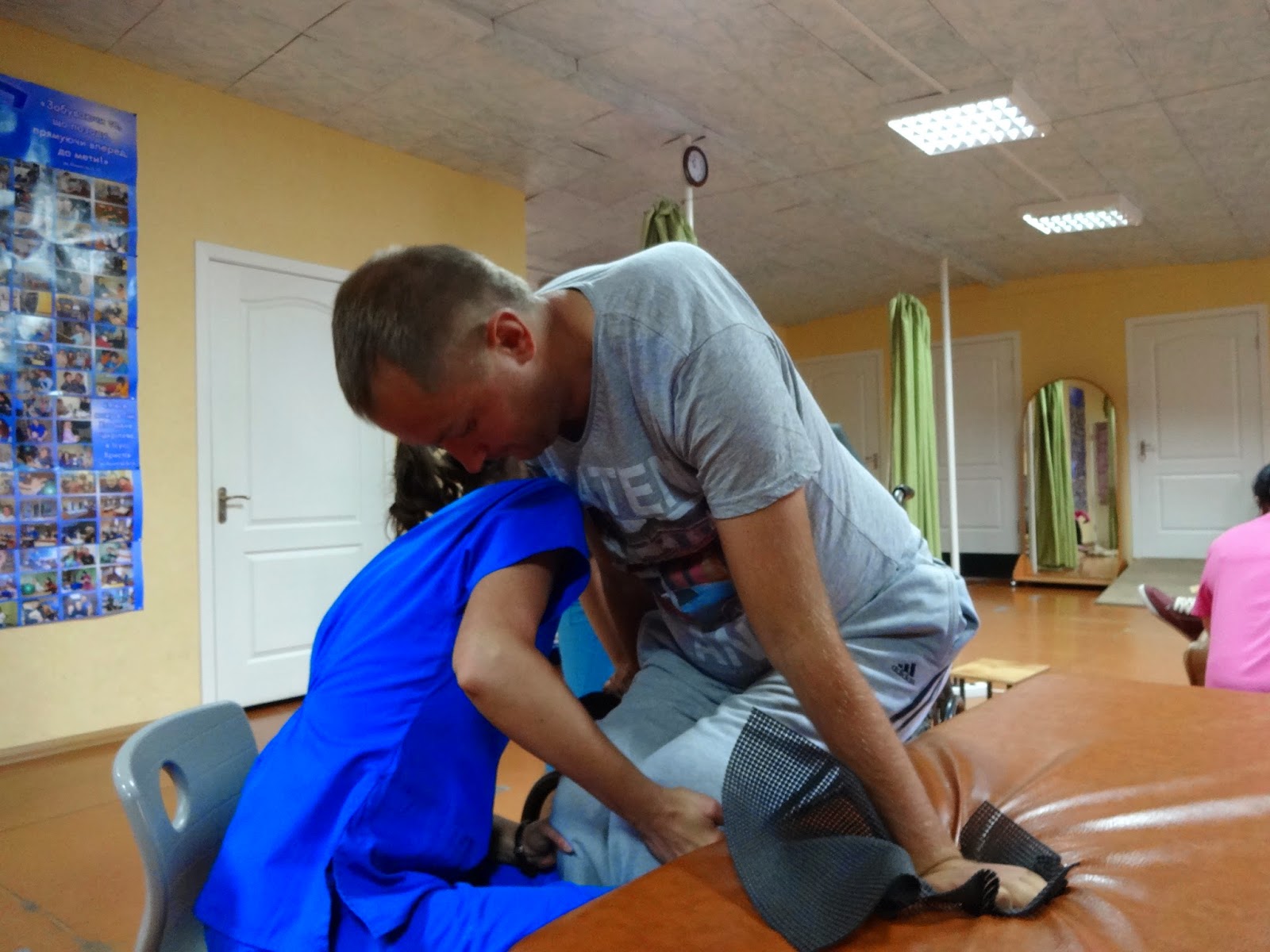 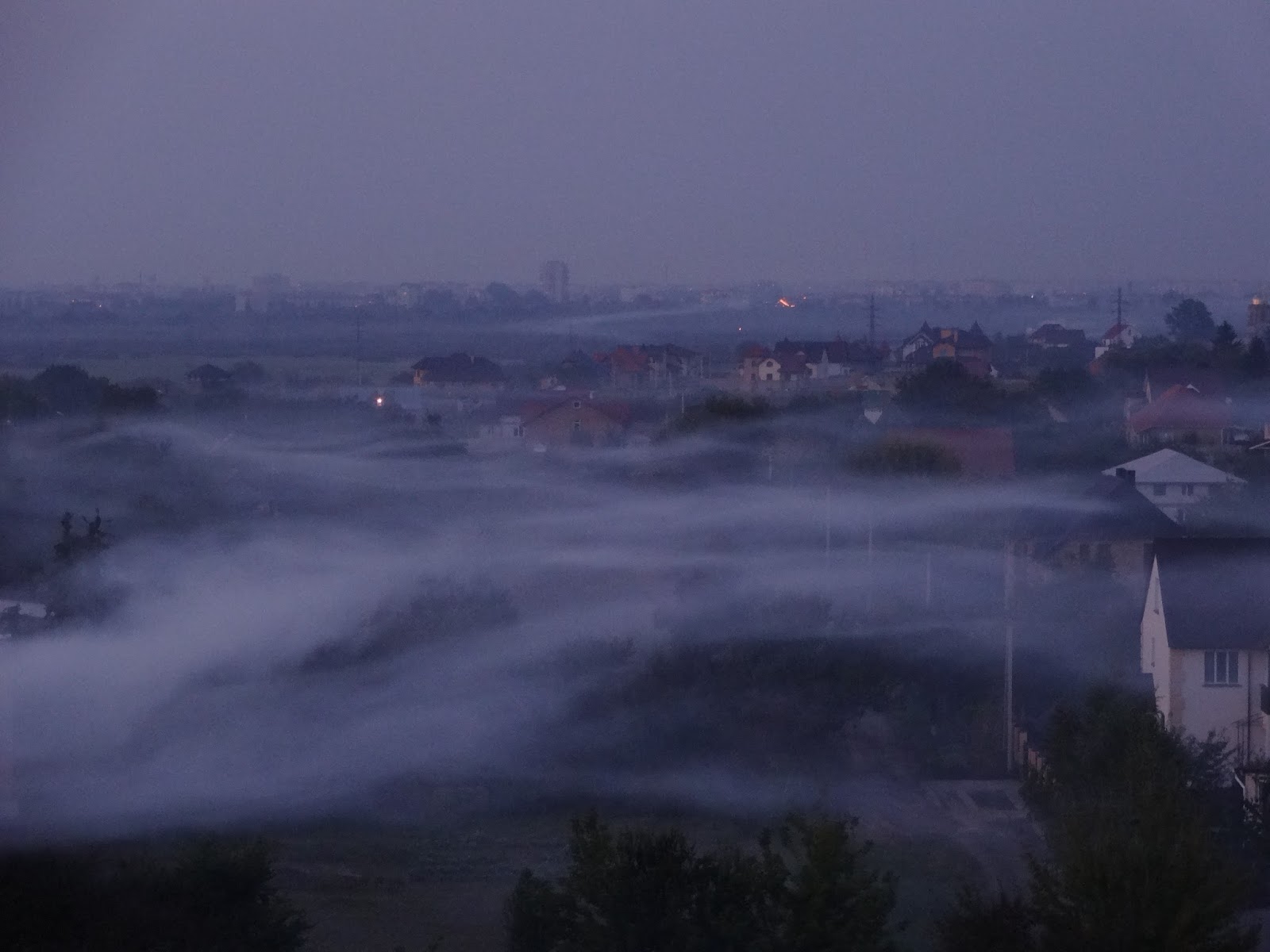